Michael Wünsche is a professional Audio Engineer and Studio Owner who leans heavily towards classical music, so when Genelec caught up with him recently about his move to immersive production, he gave us the benefit of his specialist viewpoint and outlined what 3D audio offers him and the world of classical.

Can you tell our readers a little about yourself?

I live in the city of Halle, which is located in Central Germany and marks the birthplace of George Frideric Handel. I chose to study in this region because it’s a cultural centre for classical music and I’m heavily influenced by classical styles. I followed my studies here with qualifications in audio engineering and computer science. I’m especially interested in the combination of music, acoustics and technology.

What kind of studio do you have?

Horchmal! (listen up!), my recording studio and record label, was founded about 13 years ago as a project studio for classical music, singer songwriters, voice recording and everything done by hand. It was designed as a mobile stereo recording studio, so it’s possible to mix and set up simple recording sessions there. It’s located in the central part of Halle City, and the control room has approximately 16 square metres of floor space. I also have a little room with recording equipment and storage for my collection of tech gear. Despite being a small studio, it’s a high quality environment.

Can you outline the key equipment you use in your studio?

My Genelec Smart Active Monitoring setup consists of two 8340s, five 8330s and four 8320s, plus two 7350 subwoofers. I work with Nuendo 12 DAW software, running on an Apple MacBook Pro with an RME UFX interface, and ARC Remote for volume adjustment. In addition, I make use of various preamps from RME, Audient and Focusrite. I keep a range of different microphones such as Schoeps, Neumann and Line Audio. The control room has had extensive acoustic treatment fitted; mainly absorbers and diffusers. 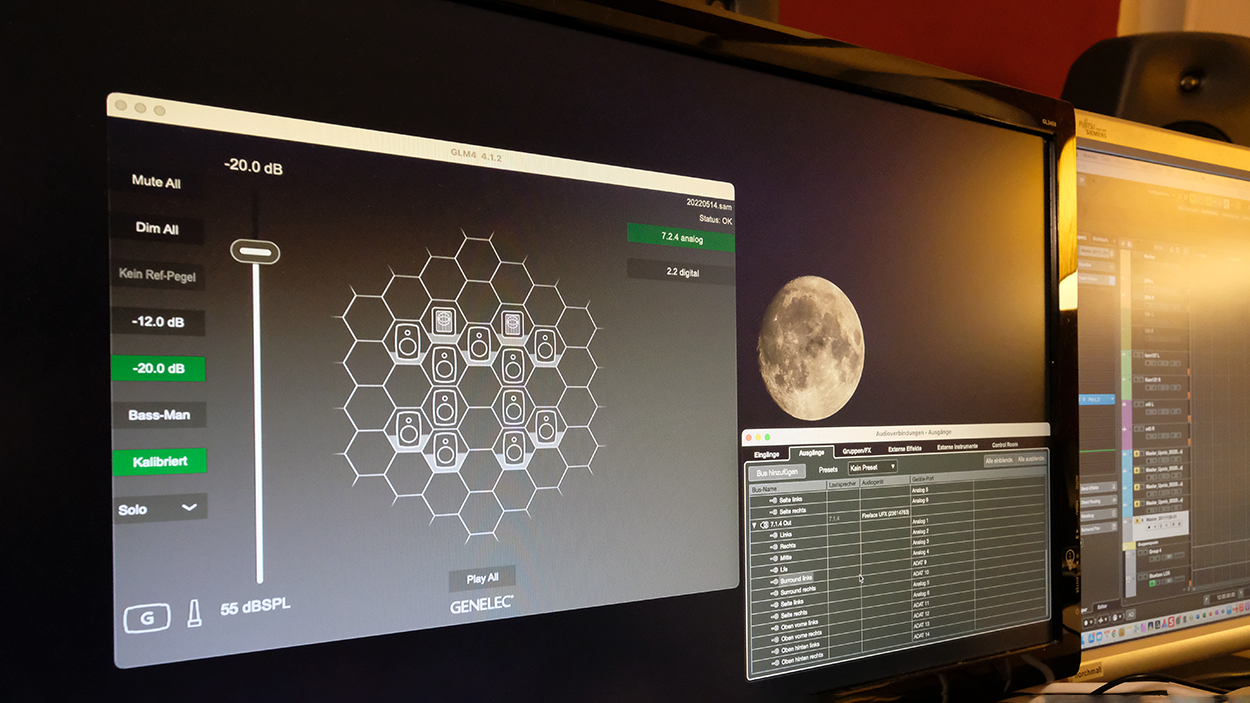 What type of work do you do in your studio?

My studio is unable to accommodate large ensembles, so that type of recording must be made elsewhere. The recording space that I have could be described as a vocal booth, so there are clear limitations to its use. Otherwise it’s equipped for mixing, mastering, upmixing and editing.

My immersive monitoring setup was installed just a few weeks ago. In the past, I always created 3D recordings of organs using a ‘Fukada Tree’ mic configuration. I’m now going through those old recordings bit by bit and mixing them in immersive. In addition, my previously-released stereo productions will gradually be updated and re-released in Dolby Atmos, which is the immersive format that I’ve decided to specialise in.

How and when did you become interested in immersive audio?

I’ve developed an interest in two main areas of immersive audio. Firstly, in the ability to capture three-dimensional acoustics. Organs, for example, seem to be predestined for immersive. They usually stand above a gallery and radiate their sound acoustically throughout the space, surrounding the listener with diffuse room sound, which spreads above their head. This type of enveloping sound doesn't work at all over stereo, and only partially over surround. Immersive audio, however, offers the possibility to authentically reproduce this effect.

Secondly, I feel that immersive compositions could herald a whole new aesthetic in music production, and I'm curious to see how composers will deal with it.

Can you talk us through your decision to upgrade to immersive, and how the process went?

A few years ago, in an effort to match my studio’s monitoring with the quality of local professional studios, I tried several well-known brands of loudspeaker. Genelec monitors were the ones that stood out and convinced me, especially with their ability to adapt to my small, lively space.

I ended up buying my two 8340s, and after listening to them for a while, I decided to add a couple of pre-owned 7350s and 8320s. When I noticed that my DAW can handle immersive productions and that my RME UFX interface supports the control of large multi-channel setups, I was determined to fully re-equip my studio. With the collapse of the market for CDs, I also felt that there’s new opportunities presented by the production of immersive audio.

I set up the entire system myself, however there was always a lively exchange with some of my industry colleagues such as Tino Hohndorf, who’s a driving force here in Central Germany, promoting new innovations with an open mind.

Now that you’re working in immersive, can you describe what’s it’s been like for you?

For me, producing in immersive is a completely new way to look at audio. Now I can design or imitate rooms and acoustics in a completely authentic way - 3D sound has a higher plasticity and transparency. I don't apply room effects over stereo channels, but set up a room within my studio’s immersive setup and then position the sound sources within it - that's a completely different approach to stereo. This way, sound forms organically in the space and that doesn't work in stereo at all.

What difference does GLM (Genelec Loudspeaker Manager) make in your work?

GLM is the coolest thing to come out since the loudspeaker was invented. Considering my large setup of 13 monitors, I can’t imagine a more elegant way to handle acoustic issues. It's great, smart, and easy to use. Respect to Genelec! Great!

How’s business been since you made the jump to immersive?

Having just started with immersive, my new projects are all yet to be published – I’m expecting the first to come out very soon. The aim of my studio upgrade was to win new customers, and due to the relatively simple distribution of immersive formats, I think demand for work will rise and this will turn out to be a good move for my studio. The first project that you’ll hear is a Dolby Atmos release of the Praetorius organ played at the Martin Luther University of Halle-Wittenberg, originally published on CD in 2011. When I recorded the organ, I used some room microphones, and now I’ve been able to mix it with surrounds and overheads using only the reverb that naturally occurred in the room. The mix recreates the sound experience of the historical hall in the school’s Löwengebäude building, with the organ situated in front of you and the room all around.

How do you see the future of immersive audio over the next few years?

I’m very curious about how this format will come to be accepted within the classical music scene. In classical music circles there’s a certain rejection of compressed, lossy formats. I feel however, that this perception may be the result of successful marketing for hi-resolution audio and not always based on real experiences. In my opinion, the benefits of immersive sound design far outweigh any loss of resolution. Just think about vinyl records – the master audio is usually uploaded digitally to the pressing plant, and buyers endlessly discuss the advantages of “analogue sound” in forums.

Overall, I think immersive audio will be a good complement to the more traditional audio formats – with each format being fully justified in its use. 3D audio offers completely new possibilities, and I believe new things need new friends.

Immersive audio has found a new friend in me. 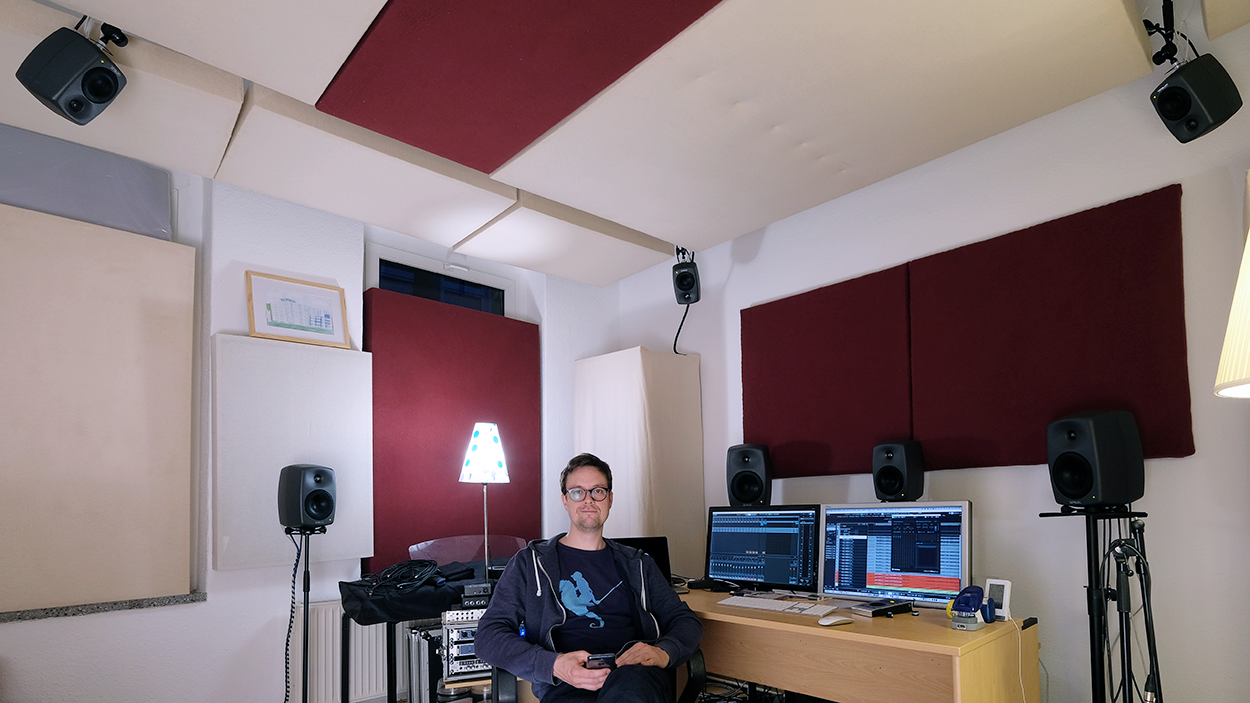 Do you want to be featured in our ‘Immersive Talk’ series? If so, just post some pictures of your setup on Instagram using the #GenelecImmersive hashtag. We’ll be keeping a look out for the most interesting setups, so who knows? We may be in touch with you!