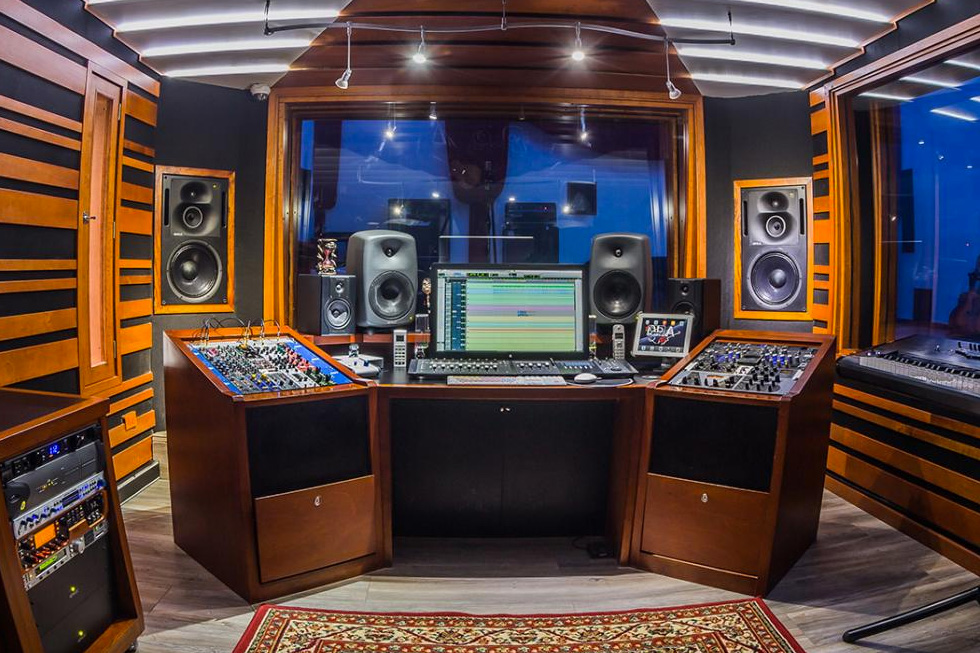 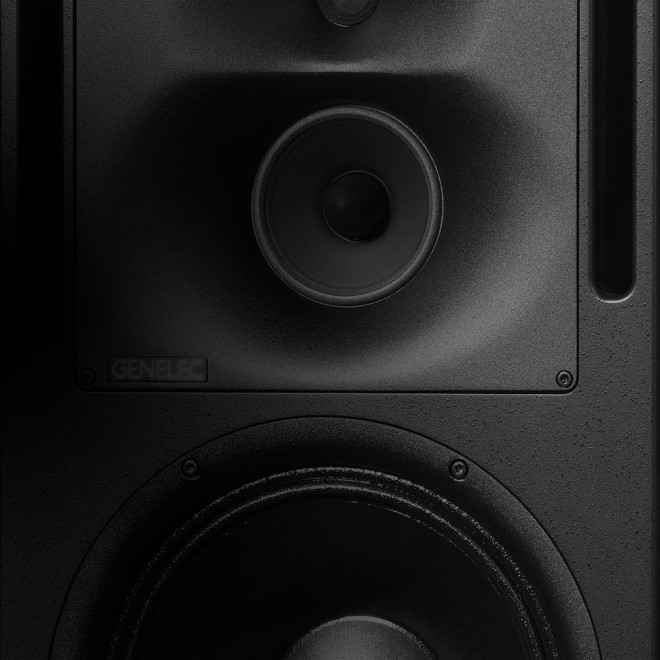 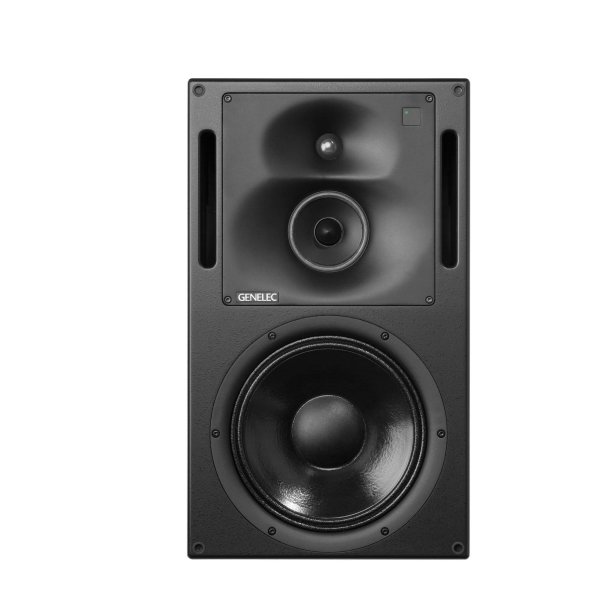 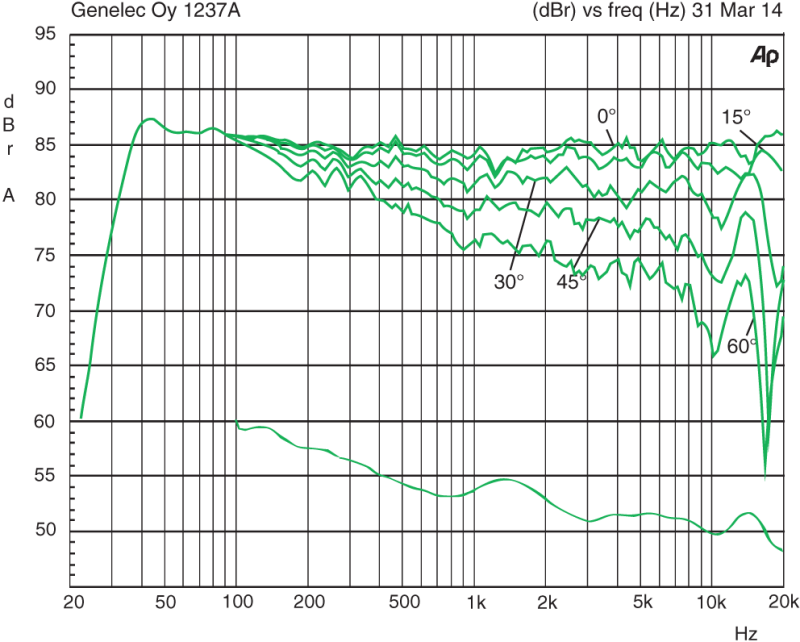 
Maximum peak acoustic output per pair in a listening room with music material at 2 m.


Maximum short term sine wave acoustic output on axis in half space, averaged from 100 Hz to 3 kHz at 1 m.


Self generated noise level in free field at 1 m on axis (A-weighted). 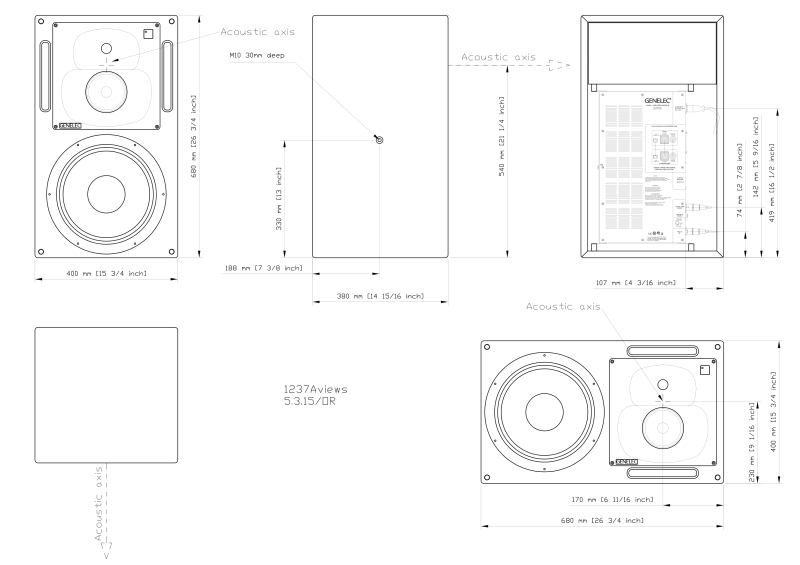 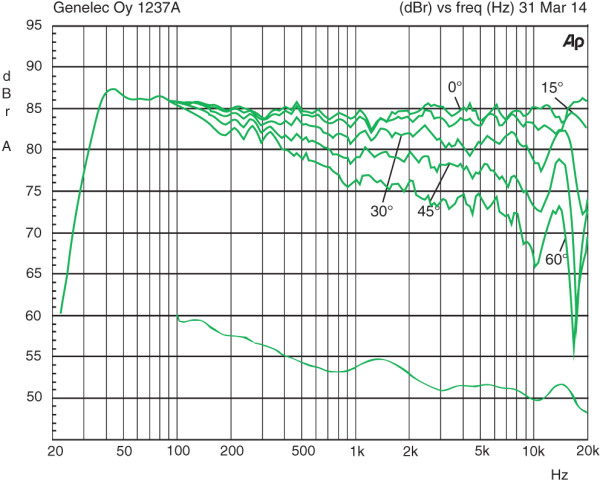 The latency at high frequencies from the input to the acoustic output, measured in the analog input:

Extended Phase Linearity in GLM set to OFF
5.0 ms

In Genelec performance graphics, the time of converting the from an electronic input signal to the acoustic output in a Genelec monitor is described by two factors – latency and group delay. The group delay factor can be read in the graphics for a specific frequency. The total frequency-specific input-to-output delay is a sum of the latency and group delay factors. To understand the significance of this total delay, consider that moving a loudspeaker away by 1 meter creates an additional delay of about 3 ms. 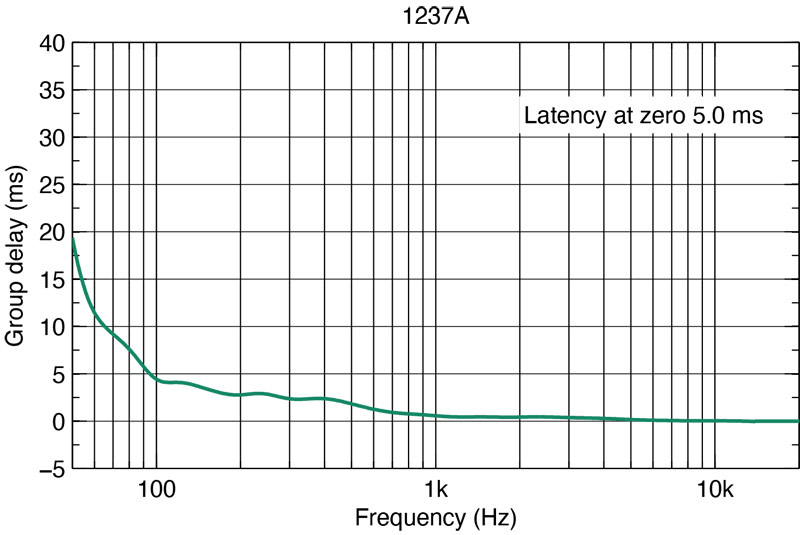 Audio electronic crossovers allow to split the audio signal into separate frequency bands that can be separately routed to individual power amplifiers which then are connected to specific transducers optimized for a particular frequency band.

In a typical 2-way system the active crossover needs two power amplifiers — one for the woofer and one for the tweeter.

Each transducer is driven by its own optimized amplifier.

Audio electronic crossovers allow to split the audio signal into separate frequency bands that can be separately routed to individual power amplifiers which then are connected to specific transducers optimized for a particular frequency band.

Introduced early 2013, Genelec’s Intelligent Signal-Sensing technology has been developed to meet with both European Union ErP Directives and the company’s own wider sustainability commitments.

The Intelligent Signal Sensing, ISS™ circuitry tracks the signal input of the loudspeaker and detects if it is in use. If the ISS circuit does not find any audio on the input for a period of time, it sets the loudspeaker to a low-power sleep state and the loudspeaker will consume less than 0.5 watts. When an input signal is detected, the loudspeaker immediately turns itself on. Basically, the loudspeaker system will start saving power as soon as work is interrupted.

If this function is not desired, the ISS™ function can be disabled by setting the “ISS Disable” switch on the back panel to “ON” position. In this mode, the monitor is only powered on and off using the mains power switch.

Note that the mains power switch will always turn the monitor off completely.

Directivity Control Waveguide (DCW™) for flat on- and off-axis response.

A revolutionary approach was taken by Genelec in 1983 with the development of its Directivity Control Waveguide (DCW™) used at the time in an egg-shaped enclosure. The Genelec DCW technology developed and refined over more than 30 years greatly improves the performance of direct radiating multi-way monitors.

The DCW technology shapes the emitted wavefront in a controlled way, allowing predictable tailoring of the directivity (dispersion) pattern. To make the directivity uniform and smooth, the goal is to limit the radiation angle so that the stray radiation is reduced. It results in excellent flatness of the overall frequency response as well as uniform power response. This advanced DCW technology minimizes early reflections and provides a wide and controlled listening area achieving accurate sound reproduction on- and off-axis.

Minimized early reflections and controlled, constant directivity have another important advantage: the frequency balance of the room reverberation field is essentially the same as the direct field from the monitors. As a consequence, the monitoring system's performance is less dependent on room acoustic characteristics.

Sound image width and depth, critical components in any listening environment, are important not only for on-axis listening, but also off-axis. This accommodates not only the engineer doing his or her job, but also others in the listening field, as is so often the case in large control rooms.

When working in critical audio production environments it is essential that monitoring systems remain reliable and functional at all times. One of the main reasons behind Genelec’s excellent success in broadcasting environments is the reliability of our products and a key element behind the reliability is the internal protection circuitry found in all products since 1978.

The protection circuitry prevents driver failures by detecting signal levels, and in case of sudden peaks or constantly too high levels, taking the signal level down automatically. Of course this feature does not affect the sound quality in any way when working within the specifications of the loudspeaker, but only prevents inadequate input signals from breaking the loudspeaker.

It’s Game On for Genelec at Supercell HQ

As one of Italy’s most respected film composers, Federico De Robertis has spent more than three decades working in the world’s leading post production studios.

The ongoing relationship between Hardwell, Genelec and studio designer Jan Morel has created a third recording facility, with the completion of the DJ and producer’s holiday home studio in Curacao. The new facility offers a completely different look and feel from Hardwell’s main studio in the Netherlands, but with the same reference sound quality and low end control thanks to Genelec studio monitors and subwoofers.

Genelec Remains Number One for Hardwell

“Hardwell wanted to have an environment where he was able to work 24 hours without any signs of fatigue,” recalled Morel. “It was a special project because it was a challenge to create the best possible producer’s studio for a number one DJ in a bedroom!"

The Audio Guys (TAG) Institute in Andheri West, right in the heart of Mumbai’s busy studio sector, has been created to educate the next generation of India’s audio professionals using a wide variety of equipment. Genelec monitors are right at the heart of the complex, with 1237 Smart Active Monitors taking pride of place in the flagship Studio C.

Frustrated that your material doesn’t sound so great on other systems? In this video we show you how to calibrate the Genelec SAM™ monitors with the Genelec Loudspeaker Manager (GLM™) Software to get the most out of your room and ensuring that your mixes translate perfectly.